To have the optimal experience while using this site, you will need to update your browser. You may want to try one of the following alternatives:

Dealing With A Small Kitchen Fire - What You Need to Know 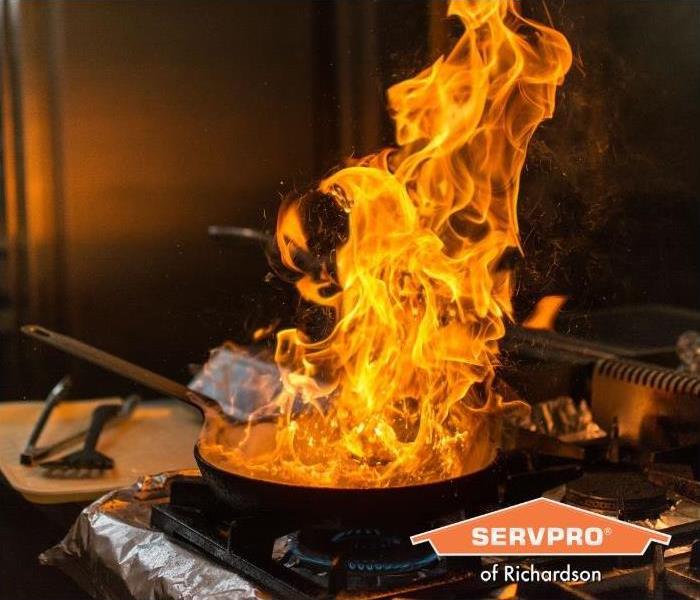 Contact SERVPRO in Richardson after a kitchen fire for professional fire damage restoration.

The leading origin of house fire damage is from kitchen mishaps. When you see a kitchen fire start, the fight or flight response is immediate. What actions you take in those precious seconds will determine how much damage occurs.

Putting out a kitchen fire doesn’t take a superhero, but it does take preparedness. SERVPRO of Richardson is prepared to come to the rescue of property owners who are recovering from a house fire, but it’s best when we can stop a fire before it spreads.

Since a kitchen fire is where house fires are more likely to get started, this guide helps you to be prepared and know how to put out an oven fire or stovetop fire.

How to Put Out a Small Kitchen Fire in Your Home

The consequences of a small kitchen fire range from ruining your favorite pan to destroying the whole kitchen. Being well-versed in the right solutions as well as using your best judgment is your best defense.

However, it’s important to remember that a kitchen fire is most manageable when it’s still small, and we have a better shot at putting out a fire in the kitchen when we catch it immediately. We do this by not leaving cooking unattended.

Knowing how to put out a kitchen fire means understanding that not all are alike. We’ll go over each scenario so you’ll know how to respond appropriately.

You’ve made popcorn a thousand times, but this time you pushed the wrong button or added an extra digit to the cooking time. Accidentally cooking something to the point where it burns is the usual cause of microwave fire.

You may have a reflex to open the oven door, but do not open the door. Instead, how to put out an oven fire is to allow it to suffocate. Leaving the door closed, you’ll turn off the oven or microwave oven to stop the cooking (unplug when possible).

Eventually, the flames will consume all of the oxygen, and oxygen is what the fire needs to sustain itself. The flames should eventually snuff out, but if they persist, call the fire department.

Fire on a Stove

A stray uncooked noodle rolls underneath the burner. If it gets too close to the gas flame or the electric coils, it will catch on fire. Stove fires happen when oils or bits of food make contact with the heating element.

Salt and baking soda are also effective with putting out stove fires. Douse the flames with either of these items (but not flour as it may make it worse).

The big lid approach is a lot less messy than pouring out salt or baking soda. Next, we’ll explain why we avoid using water to put out a kitchen fire.

Fats are a part of the American diet, so when we prepare foods we may have grease from animal fat or use oils for cooking. Say you wanted to try adding olive oil to the water when boiling pasta. If the water starts to boil over, the oil mixed with it makes contact with the burner and a fire starts. The same thing could also happen with oil spills or grease splatters from a pan. Grease fires are more precarious to put out compared to other kinds of fire.

General Safety Tips For Dealing With a Small Kitchen Fire

Kitchen fires can happen unexpectedly. Below are some steps you can take to be proactive and prepared for a kitchen fire.

If you are unable to get the fire under control, it’s good to have backup on the way. Call 911, or better yet, have someone else call as you keep the situation under control. Have an escape plan for everyone in the household should you need to evacuate.

How to Use a Fire Extinguisher for Small Kitchen Fire

Fire extinguishers are a convenient way to stop a kitchen fire from spreading. You can purchase one from your local hardware store.

When it’s time to use the fire extinguisher:

Reach Out to SERVPRO Richardson for Fire Damage Restoration

Remember, kitchen fires are a common cause of what leads to a house fire. Some basic kitchen safety measures go a long way toward preventing disaster.

SERVPRO of Richardson sincerely hopes that you can minimize the damage of a kitchen fire or prevent them altogether. But sometimes despite our best efforts, things can and will go wrong.

Our fire damage restoration team is prepared to help property owners in Richardson, Texas recover from kitchen fires from a burnt exhaust vent to those with extensive damage. Call us anytime 24/7 for immediate response to your kitchen fire problem, (but remember to dial 911 first to get the fire under control).